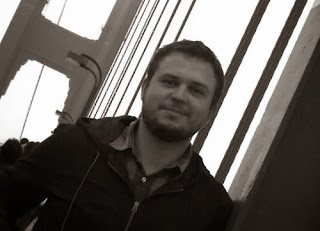 Born in Santa Fe, New Mexico, Andrew is a graduate of the MFA program at the University of Houston. His work has appeared in Barrelhouse, Five Chapters, the Tin House blog, and Best New American Voices 2010. His stories have also received the Sherwood Anderson Fiction Award from Mid-American Review and the Editors’ Prize from /nor. In 2007, Andrew traveled to Mississippi to interview Barry Hannah at his home in Oxford. You can read that interview here.

Melinda Moustakis earned her PhD in Fiction from WMU in 2011. She has been named a "5 Under 35" author by the National Book Foundation and a Hodder Fellow at Princeton University. Melinda hails from Alaska and currently lives just around the corner in Austin, Texas.

Andrew serves as an Assistant Professor in the Creative Writing program at Stephen F. Austin State University.  His story collection Crude Sketches Done in Quick Succession will be published by Queen's Ferry Press in early 2015. He is at work on a novel, and seeking representation.

Issue 37 can be purchased here. Congratulations to Melinda and Andrew and all of the 2014 NEA Fellows and grant recipients!