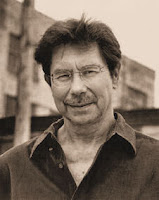 Stuart Dybek is the author of numerous books, including I Sailed With Magellan,The Coast of Chicago, and Childhood and Other Neighborhoods. Among Dybek’s numerous awards are a $500,000 2007 MacArthur Fellowship, a PEN/Malamud Prize, a Lannan Award, aWhiting Writers Award, an Award from the Academy of Arts and Letters, several O.Henry Prizes, and fellowships from the NEA and the Guggenheim Foundation. He is Distinguished Writer in Residence at Northwestern University and a member of the permanent faculty for Western Michigan University’s Prague Summer Program.

Dybek was also the judge for Third Coast's 2009 fiction contest. Stu's selection "Winter-Over," by Ashley Shelbey, can be found in the Fall 2009 issue out now. Remember there's still time to enter this year's fiction and poetry contests!
Posted by Unknown at 12:55 AM No comments:

Just a reminder that Third Coast's Poetry and Fiction Contest deadline is fast approaching! Our December 1 deadline is now a postmark deadline, which means you've got exactly two weeks left to polish your poems and stories and send them our way.

Contest winners receive $1000 and publication in Third Coast's 15th anniversary issue (which is already looking sharp, we must say).

The illustrious Ann Beattie will be judging our fiction contest, with David Wojahn judging poetry. Check out the full contest guidelines here.
Posted by Laura Donnelly at 6:16 PM No comments:

What the Editors Are Reading

This month our editors are reading:

Posted by Unknown at 7:00 AM No comments:

Email ThisBlogThis!Share to TwitterShare to FacebookShare to Pinterest
Labels: what we're reading

Top 10 Books of the Year

Earlier this month, Publisher's Weekly posted their picks for Top 100 books this year in several categories, as well as a new feature to this year's list: their Top 10 picks that stood out from the rest.

As Alicia Suskin Ostriker points out on She Writes, every single title chosen for the Top 10 was written by a man. Perhaps the thing that is of even more interest than the gender of the writers is the similarities of their subjects (and in turn the subject's genders). Ostriker writes:

It was a little dismaying to read the descriptions of the books, which you can do at http://www.publishersweekly.com/article/CA6704263.html, and realize how very much it was shaped by "boy" subjects. "Gritty, mostly honest-hearted ex-heroin addict protagonist Ricky Rice!...Rebellious Yankee son of a father who fell victim to the Depression!...[T]he men who built America’s intercontinental ballistic missile program in the 1950s and ‘60s!...Two 40-ish men seeking love and existential meaning!...Grann’s vigorous research mirrors Fawcett’s obsession with uncovering the mysteries of the jungle!...Philosopher and motorcycle repair-shop owner Crawford extols the value of making and fixing things in this masterful paean to what he calls manual competence!..." That's six of the ten.

Read Ostriker's full article "Publishers Weekly Versus the Rest of Us" here.

Over on the Editorial Ass(istant) blog, Moonrat, herself an editor states that she sees this all male top ten list as indicative of two factors in publishing:

On November 10, at 7:00 p.m. in the Kalamazoo Public Library (Central), Jennifer K. Sweeney, winner of the 2009 James Laughlin Award for the most outstanding second book by an American poet, and Chad Sweeney will read from their newest books. Event open to the public.

"Jennifer K. Sweeney's How to Live on Bread and Music is a remarkable achievement from the hand of a poet with a subtle and compassionate mindfulness."
— Afaa Michael Weaver

"The poetry of Chad Sweeney is exuberant, imagistic, and prophetic. . . . a poetry of awakening, of coming into knowledge."
—Paul Hoover

Jennifer K. Sweeney is the author of How to Live on Bread and Music, winner of the 2009 James Laughlin Award from the Academy of American Poets and the Perugia Press Prize. She is also the author of Salt Memory, which received the Main Street Rag Poetry Award. Nominated
four times for a Pushcart Prize, her poems have appeared in Southern Review, Spoon River, Crab Orchard, Hunger Mountain and Passages North where she won the 2009 Elinor Benedict Poetry Prize. She teaches poetry and writing privately, serves as assistant editor for DMQ Review and lives in Kalamazoo, Michigan.

Chad Sweeney is the author of three books of poetry: Parable of Hide and Seek (Alice James, 2010), Arranging the Blaze (Anhinga, 2009), and An Architecture (BlazeVox, 2007). He is the editor of Days I Moved Through Ordinary Sounds (City Lights, 2009) and coeditor of the literary journal Parthenon West Review. His work has appeared in Best American Poetry, Verse Daily and elsewhere. He is working toward a Ph.D. in literature/creative writing at WMU where he teaches poetry and serves as assistant editor of New Issues Press.

Read the article here.
Posted by Unknown at 2:01 AM No comments: